PORT-AU-PRINCE—A three-month-old baby suffering from shortness of breath recently was checked into a small hospital in the Haitian capital. A radiologist at work in his New York office diagnosed that the child’s lungs were collapsing.

“I communicated to the hospital urgently,” says Allen Rothpearl, the Long Island radiologist. The condition, pneumothorax, might have been caused by an injury to the baby’s chest during the Jan. 12 earthquake. 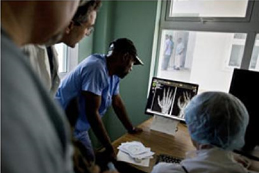 As Haiti moves from an emergency to a recovery phase in the aftermath of the quake, fewer foreign health professionals are arriving from Europe and the U.S. to cope with the thousands afflicted with quake-related injuries or subject to pneumonia, tuberculosis and other diseases spreading through makeshift encampments. At St. Damien’s, a nonprofit pediatric medical center, soon, ” we will be left with just a few Haitian doctors who don’t have the same expertise,” says Patrick Reache, assistant national director for special projects at the hospital.

That’s where Dr. Rothpearl, an expert in “teleradiology”, comes in.

Horrified by images of earthquake victims, “I went home and told my wife I had to find a way to use my expertise to help,” recalls the physician. “But I couldn’t leave my practice to go to Haiti.”

Weeks later, he read in a radiology newsletter that the x-ray suite at St. Damien’s had suffered no damage from the quake. To save money during construction years earlier, builders had erected six-inch thick concrete walls around the room to avoid radiation seepage — instead of using pricier lead sheets.

Barbara Gearhard, an x-ray technician in Boise, Idaho, who was cited in the article because she had designed the radiology room, broke out in the tears when Dr. Rothpearl called to volunteer his services. “It’s an incredible thing to give the highest standard of x-ray reading to the poorest people in the world.”

Since Feb 5, Dr. Rothpearl has led a team of physicians sitting in New York, California and Texas who are reading 20 to 40 digital x-rays a day for the hospital at no charge.

Every digital x-ray taken at St. Damien’s is automatically transmitted to Dr. Rothpearl and his team, who respond within an hour. The software takes images produced by the x-ray unit, then digiti2es, stores and transmits them. If an abnormality is detected, they alert Mr. Reache, who oversees St. Damien’s x-ray operations, to draw the report to the attention of a physician.

Through their remote readings of x-rays, the radiologists have tracked the evolution of Haitians’ health crisis since the quake: The first few weeks, they saw mainly fractured and crushed limbs, such as an 18-year-old with six separate fractures in her femur.

Lately, the physicians have been observing the consequences of unsanitary, crowded living conditions in the camps, where hundreds of thousands of people now live.

Earlier this month, Dr. Rothpearl donated new equipment to the hospital, which upgraded the server for digital radiology, boosting its t ransmission speed and multiplying its storage capacity. “This is top-of-the-line technology,” says Mr. Reache’, as he installed it in the green radiology suite. “Real sweet – just like the one Dr. Rothpearl has in his office.”